It looks like you're new here. If you want to get involved, click one of these buttons!

In the early morning hours of the fest, a bolt of lightning struck the crowd, sending audience members flying and leaving three individuals in a hospital’s intensive care unit.

The 2012 With Full Force Festival boasted a powerful lineup, including bands such as Machine Head, Soulfly, Children of Bodom, Cannibal Corpse and many more. However, it was during Heaven Shall Burn’s set when the bolt of lightning struck.

German website Spiegel.de described the shocking happening in full detail. “The first showers, heavy as they were, provided just an inkling of what was to come,” the site describes. “Just before 2 a.m., the next black cloud parked over the stage. And the lightning it unloaded resulted in 51 injuries, three of them landing in the intensive care unit of a nearby hospital. Witnesses say that the lightning strikes sent some people flying through the air — and left behind a wasteland of destroyed tents, panicked guests and a venue flooded with mud and deep puddles.”

Strangely enough, a lightning strike occurred the day before the June 30 festival date, where three women were killed by a bolt of lightning while playing golf in Hesse, Germany. A fourth member of the group survived, but is recovering in the hospital. 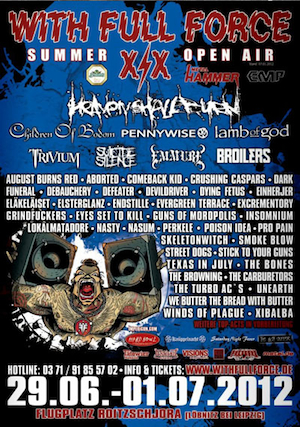